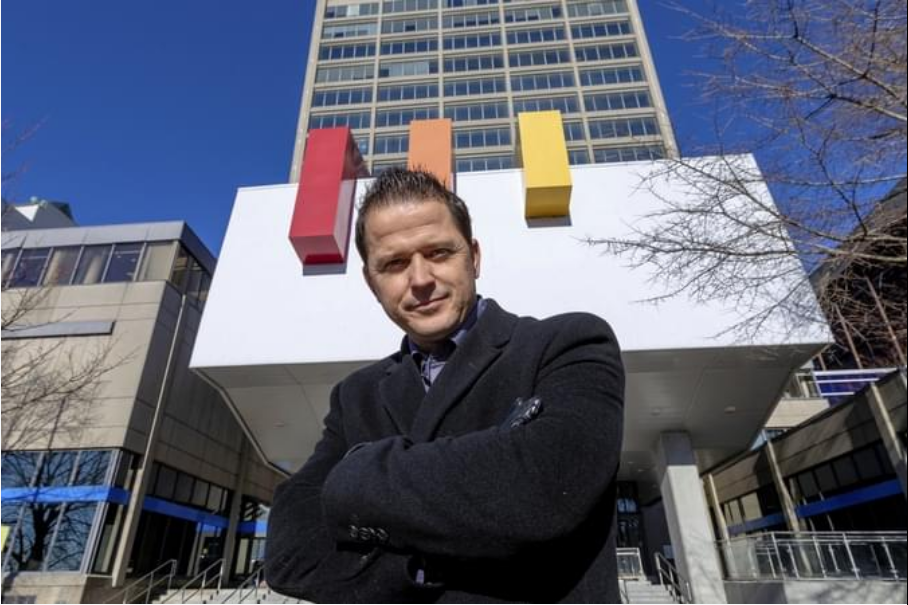 Saint John – Keith Brideau was sitting of his rooftop patio five years ago when he spotted his dream building.

The Saint John developer was already well know in the city, slowly transforming neglected brick and stone buildings into residential and commercial hubs in the Uptown. His firm, Historica Developments, had been running for five years at that point.

But what he paid his eyes on from his patio that day would be his biggest project to date.

“I just happened to look at the (city hall) building that day and realized how great it would be if I could buy it some day,” he recalled.

That day has finally come.

Brideau has partnered with investors Dr. David Elias and Alex Elias to purchase the Saint John City Hall tower. The $3-million deal includes a 100-space parking garage, as well as a section of one of the longest pedway systems in Atlantic Canada.

Brideau anticipates the team could invest in the area of $5 million into renovations over the next few years.

About a dozen commercial tenants are in the 16-storey building including a restaurant, a hair salon and a travel agency. The City of Saint John is the anchor tenant in the tower, occupying six floors right now until it reduces its footprint to four floors in 2019.

Once that occurs, Brideau says there will be 80,000 square feet of vacant space in the tower his team will slowly transform into high-quality office space. He is already in talks with potential renters.

The upgraded office tower won’t bear the name of his Historica Developments company, nor that of EMG, the company belonging to the Elias family.

“We’re going to be branding the building a unique brand. We’re looking for other National tenants, so there’s an opportunity from a marketing point of view that someone could have their name on the building.”

Renovations will also be occurring to improve the curb appeal of the building and the pedway system.

But Brideau said the short-term focus will be on the multimillion – dollar renovation of the first four floors for the city government.

The city of Saint John plans to invest $3.5 million for “fit-up” interior renovations, with the landlord covering the cost of structural renovations like electrical and a new elevator.

Historia Developments owns 17 properties, including The Aberdeen on Canterbury Street and Bustin’s on Germain Street.

Brideau brought the Elias father-and-son team to the table on the city hall deal after he was approached by the current building owners about a year ago. At that point, Brideau had been trying unsuccessfully for years to get Ontario-based Se-Fish Associates to sell the office tower.

He said Saint John is filled with people open to growth and development.

“We’re on the cusp of some great change and there’s a lot of momentum right now in the uptown and what we’re doing right now with (city hall) is going to accelerate that with our investment,”