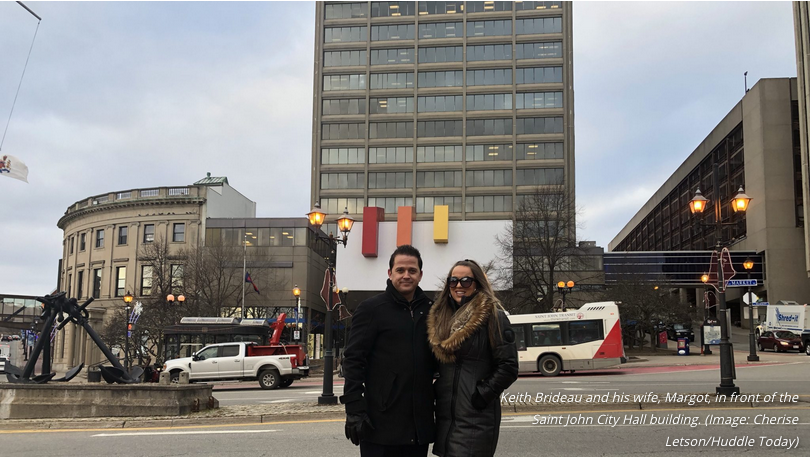 The 16-storey building has been purchased by Saint John developer Keith Brideau, Alex Elias and Dr. David Elias for $3-million.

The building is located at 15 Market Square and consists of 180,000 square feet of office space, the City of Saint John council chambers, and retail shops and bars on the pedway level, which connects both the Brunswick Square and Market Square malls. The new owners plan to redevelop the entire building.

Brideau, who is the president and CEO of Historica Developments, told Huddle in an interview that he had been eyeing the building for about five years. After coming to an agreement with the seller, he started looking for partners to go in on the project, which he found in father-son team Alex and David Elias.

David Elias has done developments around New Brunswick, the most recent one being the Vimy Estates project Saint John’s north end.

“Typically what I do is I look for partners that can add value and also bring some capital to the table to make projects like this a reality,” said Brideau. “I essentially had a list of potential partners and I set up a variety of meetings to see who would be interested.

“After meeting with a few different parties, I met David and his son Alex and talked to them about the opportunity and they were quite excited about it and quite interested.”

Renovations to the building will include moving all city hall offices down to the first four floors and revamping the lobby and council chambers on the mezzanine level. All of the city’s customer-facing departments and services will also be located on the ground to be more visible and accessible. The city plans to release for details about the new layout on a later date.

The rest of the building, including its entrances and the pedway, will also get a face-lift.

“A lot of this building is about 47-years-old. It was built in 1971, so a lot of the finishes, the flooring, the light fixtures, they’re probably close to 50-years-old,” said Brideau. What we’re going to do is essentially upgrade everything that somebody can see and touch.”

They will also be doing energy efficiency upgrades to the building too.

“We’re looking at solar installations possibly and we’re going to get an energy audit done to identify areas to cut our energy costs because that’s very important to our tenants,” he said. We’re also going to be filling in the upper floors with high-quality finishes to attract high-quality tenants.”

Boasting three elevators, great waterfront and city views and parking for 100 vehicles, Brideau said they are looking to attract office tenants at first, adding he has already done some showings of the spaces. However, that plan could change down the road.

“What we’re trying to do first is we’re going to try to attract office tenants, then if we don’t get traction with that over the first year or so, then we’re going to look at other options around residential down the road,” he said. “But as of right now, we’re really focused on maintaining it as an office building and upgrading the building.”

“The plan is to work with our tenants, to take care of them, to understand any issues and concerns they have. We understand the previous landlord wasn’t very hands-on. We are incredibly hands-on,” he said.

“We’re already starting conversations and discussions with our tenants to understand how we can make things better because they know, they’ve been here many years. What we want to do is help them improve their businesses and make more money and that’s how we help ourselves.”

Improvement will also be made outside the property. This includes upgrading the building’s plaza with a modern look and feel, more greenery, and new lighting to accent the property.

“That plaza out front is very seldom used. I think it’s an incredible opportunity. What I would even like to see is bistro tables, chairs, more seating, just more welcoming public,” said Brideau.

“I think just by improving the light and adding a little extra greenery and softening the space and making it a little bit more functional, I think that’s going to make a big difference … To me, I see it as an extension of the boardwalk, and right now it’s just not being utilized the way it should be.”

This is a very different kind of project for Brideau, who up until this point has worked on smaller, more historical properties that are up to 150-years-old. Though it’s a bigger building, it’s also newer. This, he says, will make the renovation a bit easier.

“I do see this as being a little simpler because we’re going to really upgrade the building and not repurpose it, per se,” he said. “It’s a big building, so there’s going to be a new set of challenges, but it’s nothing I’m not used to though. I’m used to problem-solving on a regular basis every day. It’s just a matter of working hard and bring new solutions to the table.”