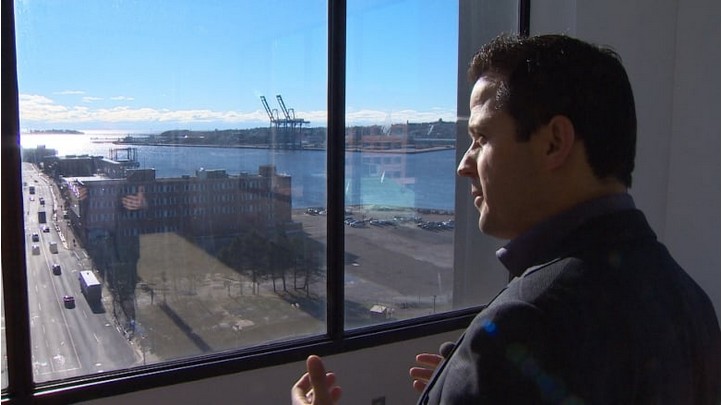 Standing by a picture window half way up the city hall office tower, Keith Brideau marvels at the uninterrupted views of Saint John’s harbour and central peninsula.

“I’ve been dreaming about this for over five years,” he says. “I just live down the street on Water Street and every once in a while I’ll go up to my rooftop and look over at this building and I’d see it and I’d say, ‘​Wouldn’t it be cool to own that nice office tower?’”

The developer, who is president and CEO of Historica Developments, began negotiations with the previous owners, Se-Fish Associates Ltd., about two and a half years ago.

It saw Brideau and business partner, Dr. David Elias, purchase the 16-storey tower for $3 million, less than half the $7.5-million assessed value.

The purchase comes with an anchor tenant, the City of Saint John, which will occupy four floors for the next 15 years.

There are a dozen other tenants rent spaces, large and small, in the building, but half of the building — eight floors — is wide open and vacant.

“We’ve already started conversations with two or three other potential tenants to take over some of these upper floors,” said Brideau. “We’re going to work very hard on attracting high-quality tenants. We’re going to renovate the whole building.”

PLAN B
Brideau will target the office market, pitching not only the views but the central location with a 100-car parking garage and a direct link to the pedway system, an indoor climate-controlled walkway connecting several blocks in the uptown.

Although he has extensive experience converting the upper floors of historic city centre buildings to loft-style apartments, Brideau said going residential would only be a “plan B” in this case.

Residential conversion in the case of the tower would be two to three times more expensive than upgrading for offices.

“Plan B would be, OK, let’s take some of these floors that have these amazing views, could be 10 condos, could be 10 apartments, on the upper floors,” he said. “We could have these penthouse units and a rooftop patio with some of the best views that you could find anywhere in Atlantic Canada.”

For the next several months, however, the focus will be on renovations for a new city hall space that will occupy four of the building’s first five floors.

That begins with a meeting Thursday with city officials and people from TOSS Solutions Inc., a design contractor hired by the municipality.

That will be followed by the gutting of two floors that once held courtrooms and offices.

An energy audit is also in the works.