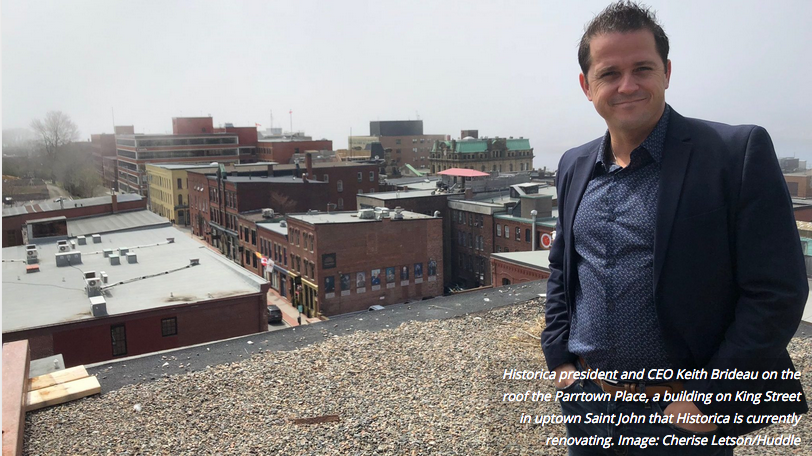 SAINT JOHN – IN 2008, THE CITY WAS EXCITED BY THE PROSPECT THAT IRVING OIL WOULD BE BUILDING A SECOND OIL REFINERY IN SAINT JOHN AND THAT THE PROVINCE WOULD BE CONSTRUCTING A SECOND NUCLEAR REACTOR. FOR KEITH BRIDEAU, THIS KIND OF NEWS MEANT BIG OPPORTUNITIES IN PROPERTY DEVELOPMENT.

Up until that point, Brideau was flipping small residential properties but was looking to go bigger. In order to do this, he had to seek outside investment. He took to Kijiji.

“What I told investors when I posted this across the country was, ‘Attention Real Estate Investors: I’m going to tell you now what you wish would have heard five years from now had I not told you today,’ ” says Brideau.

“Fortunately, by going out on a limb 10 years ago … I was able to take my business to the next level and establish new relationships and raise lots of capital to acquire commercial properties and essentially start Historica.”

Historica, which is celebrating 10 years in business this year, has become a prominent property development and management company in Saint John, specializing in high-end historical residential and commercial properties in the city’s core.

The company now owns 17 different buildings in the city. Their first flip was the “Aberdeen Hotel,” which spans a block on Princess Street from Canterbury Street to Prince William, which was purchased for $1-million. Today the building is home to high-end apartments, offices and several bars and restaurants.

The second oil refinery and nuclear reactor never happened, to the disappointment of many. But what it did do was actually allow Historica to develop more properties.

“Once they heard that the refinery wasn’t going to go ahead, they pulled back and they left Saint John. What that did is it created a bit of a void in terms of a lack of buyers. The economy actually got very soft at that point in time.”

This meant Historica was able to buy real estate at a cheaper price.

“If the market is very hot and booming, its hard to get good deals,” says Brideau. “When those projects were shelved, we ended up getting better deals and that’s what helped us create some value.”

Historica residential units cater to young- and middle-aged professionals who don’t want to worry about maintenance and the other responsibilities that come with homeownership. Brideau says there is also a growing interest from baby boomers.

“Those folks who are now empty nesters that are looking for a place to live for the next 10-15 years of their life that realize we have this amazing quality of life here for a really good price,” he says. “They want to be able to socialize, they want more time for themselves, they want to be able to lock their door, go on vacation and not have to worry about anything.”

Though those big industrial projects didn’t come to fruition, something else started occurring in Saint John’s uptown core over the past serval years. More small, independent businesses starting popping up in the area – a mix of retail businesses, bars and restaurants, some of which are operating out of Historica-managed properties.

More people have been moving into the city centre and more developers have been purchasing long-vacant uptown properties with big plans. For Brideau, this is all great news not only for Saint John, but for his business too.

RELATED: Why More Boomers and Millennials Are Buying Homes in Uptown Saint John

“The value of our portfolio rises as the neighborhood grows stronger and there’s more demand. I feel a rise of the tide lifts all boats and because we were in 10 years ago and we accumulated a really good portfolio and our assets are very well positioned and located, I think we’re going to do very well in the long term,” says Brideau.

“We’ve been waiting a long time to see this type of change and I feel really good about the progress we’ve made and the impact we’ve made and it’s a really good feeling to be able to look back and see the transformations that we’ve created and helped increase the momentum toward.”

Yet this kind of change hasn’t come without challenges. Saint John’s city centre hasn’t seen this kind of increase in both residential and commercial growth in a long time. Late last year, some residents in a Historica property complained about the noise from local bands playing across the street in a venue where live music has been hosted for years.

Complications around outdated bylaws showed just how much the makeup of the city core was changing. But though more people moving uptown is a good thing, Brideau says it’s not for everybody and that culture and entertainment are crucial to keep people, especially young people, in the city.

“We understand that uptown living is not for everybody. That’s one of the challenges, there are people that are probably a lot more sensitive to noise than other folks. We’re doing out best to create the perfect living environment for everybody but we also have to be realistic,” says Brideau.

“Trying to find that balance isn’t easy, so what we try to do now is that anybody who is moving into any of our properties understands they are moving into a very action-packed, vibrant neighborhood, similar to what you’d experience in downtown Halifax or smaller areas of Toronto. It’s very urban and it’s fun.”

Looking forward, Brideau predicts more development for Saint John. He sees the city core continuing to densify with more vacant lots and surface parking lots being developed for residential and commercial use. He also sees more development of the city’s waterfront.

“There’s a huge opportunity to develop our waterfront. It’s surprising the amount of waterfront space we have available that is still undeveloped. I see that being filled in,” says Brideau.

As for Historica’s future, the company is still in the process of renovating Parrtown Place on King Street, which will become high-end commercial and residential units. Brideau says he is looking at about four or five deals right now, including one which will be the biggest of his life and a “game changer” for Saint John and its uptown. He’s tight-lipped on details but says he is currently looking for investors.

“I’m looking at the biggest deal that I’ve ever done. It will be much bigger than anything we’ve ever done before,” he says. “We’re looking for investors right now and it’s a huge opportunity and in order for me to take my business to the next level, I need to find some strategic financial partners, people that want to capitalize on our success, know-how, team and track record.”