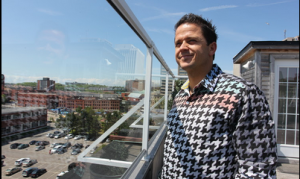 SAINT JOHN * Sitting on his rooftop patio on Canada Day, Keith Brideau had the perfect view of the fireworks. He and 15 friends mingled on the deck, barbecuing and basking in the warmth of the night.

Rooftop patios are a growing trend in Saint John, something Brideau said is helping to expand the real estate market in the Port City.

Brideau, president and CEO of Historica Developments, said for the past seven years he’s built a handful on his properties. He got the idea after spending time in Toronto.

“I thought it was a really cool experience when you went onto the rooftop of a building and looked at all of the buildings. You had a totally different experience.”

More people looking for apartments are asking for that kind of outdoor space, he said. They want a common area where they can host and often that’s difficult with the small property sizes in uptown.

In addition to an open space, people want those breathtaking views.

“I have a personal rooftop patio overlooking the harbour and to me it offers me multi-million dollar views of the city.”

In other cities that’s what those views can go for, but in Saint John the price tag tends to be smaller. But they are in demand and Brideau said he finds more people are asking for rooftop decks.

The character of the building combined with those open spaces adds a tremendous value to the real estate market, he said.

The chairman of the city’s heritage development board is also calling the growing trend positive, saying it’s helping increase development on typically-vacant floors of heritage buildings.

Bob Boyce, an architect and chair of the board, said over the past five to 10 years more and more people are approaching the committee to install rooftop decks. The board approved a rooftop space for a Duke Street homeowner only last month.

“Quite a few of them are popping up,” he said.

It’s only in the past few years this has become more commonplace. People are interested in experiencing their properties in ways they might not have done, before, he said.

“There’s often not room for a decent yard for tenants to enjoy the outdoors on a day like today.”

So people look skyward. Anyone can apply to the heritage development board and so long as they meet a few guidelines, construction can go ahead.

Boyce said all applicants must start with a flat roof. Generally they want the patio to be pushed back from the street so it’s not as visible. They’ve approved wooden and glass railings as well, despite the fact they look modern compared to the heritage buildings.

“We generally accept them as clearly not being something that was original,” he said.

Then they have to take into consideration building code requirements like proper access and safety, along with the load the roof can hold and how many people might get on the roof. Those specifications fall under the control of the building inspections department.

Brideau doesn’t find it difficult to adhere to the heritage of the city, either.

“The heritage development board, I find, is pretty open-minded when it comes to rooftop patios.”

In some cases they have to engineer them to avoid things like the wind off the harbour, but in most cases building one is pretty straightforward.

Brideau believes this is where development in Saint John is headed next.

“In the next decade you’re going to see many more rooftop patios. I know quite a few people who have them and to see them in the distance, enjoying their rooftop space and having barbecues and friends over. It creates a really cool vibe here in uptown Saint John.