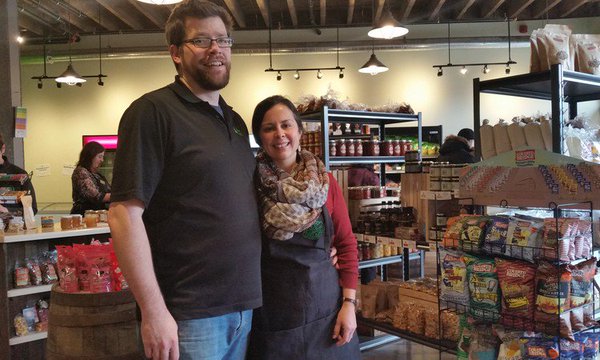 Saint John * Keith Brideau’s vision for a revitalized section of uptown Saint John is one step closer to reality.

The co-founder and vice-president of Historica Developments announced construction is underway at 30-38 Canterbury St. to make way for a trio of new businesses and 14 high-end apartments.

Setting up shop below the units will be Picaroons, Real Food Connections and Buckland Merrifield Gallery, an art and craft spot established by Peter Buckland and Shannon Merrifield.

The restoration of the aging brick buildings is the first phase in developing a new, vibrant area on the typically quiet street, Brideau said on Thursday.

“I think this area is going to go through the biggest transformation in uptown probably over the next couple of years,” he said.

The second phase for the block, on the corner of Canterbury Street and Grannan Lane, includes similar type buildings on Germain Street with high-end apartments in the upper levels and businesses on the ground floor. He said Historica will eventually roll out 22 more apartments on Germain, and he’s in the midst of finalizing leases for office space and a potential new restaurant and pub. Between the structures on both streets will be a courtyard for tenants surrounded by brick buildings, he said.

The idea would be to use the alley (Grannan Lane) as a social urban space with other shops, pubs and cafés popping up.

“It’s similar to what you expect when you go into an old European city where it has that character, has the charm, and we’re just going to polish it up and keep that authenticity about the buildings and about the alley,” Brideau said.

Sean Dunbar, the owner of Picaroons, said he’s been hearing Saint John consumers have wanted to buy Picaroons growlers for years. He said the brewery is familiar with the architecture firm, Acre Architects, as well as the owners of Real Food Connections, so it was an easy call when the opportunity presented itself.

“I like the energy in uptown Saint John. It feels like a really great place to be.”

For Picaroons, which will be located on the corner, opening next to Real Food Connections isn’t a coincidence, Brideau said.

“I felt like the two businesses, Picaroons and Real Foods, really want to be close to one another because a lot of their clientele is similar,” he said. “You know, you can get some local beer and you get some local food.”

Dunbar called it an “attitudinal demographic,” meaning their customers have similar attitudes towards life.

“I kind of know what they do and support it a whole lot, so I just thought we would all be stronger together.

Dunbar said he expects a late fall opening for the store that will slightly resemble the Brewtique in downtown Fredericton.

It will be a retail store, he said, but with a different brewing system that will allow for a wider selection of beer than at the Fredericton shop. Dunbar said they’re also developing a concept of rotating beer-themed retail.

“We want to put a bit of a dynamic aspect to it, an ever-changing aspect to it,” he said. “We want it to be a place where people come and see … what else goes around the beer and what matches the beer.”

Historica, which purchased the buildings from the Bustin family in 2014, has lease agreements with the trio of businesses for the 7,000 square feet of commercial space on the ground floor.