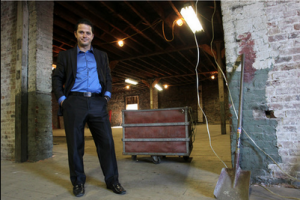 Keith Brideau flipped his first house right out of university, back in 2004. He put some sweat equity into it, spent a few thousand dollars, painted it, put new countertops in the kitchen and added new hardware, new light fixtures, etc. It was a really cheap townhouse but it was one of the most important purchases of his life because it got him into real estate.

When his friends were impressed with his first renovation, he decided to buy a duplex and get a better understanding of the real estate industry. Taking something that was ugly, under-utilized and needing some TLC and using his imagination and creativity to make it beautiful, useful and coveted became Keith’s passion. This passion was unleashed as he started buying bigger properties to develop.

Raised in the north end of Saint John, Keith graduated from UNB with his bachelor of science in engineering and a diploma in technology, management and entrepreneurship. Keith likes to be involved in his community – on top of being the vice-president and co-founder of Historica, he is a member of the Wallace McCain Institute, a Rotarian, sits on the City of Saint John’s planning advisory committee and he’s a director of Uptown Saint John Inc.

Q: When did you start seeing the opportunity for redevelopment of older buildings in Saint John?

A: I lived in Toronto for about 10 months working for a professional services company. I was going back and forth between Saint John and Toronto every two weeks. I was living in a condo tower in Toronto with 21 floors, a rooftop patio, a hot tub, a few barbecues, fitness centre, movie theatre and a golf simulator. When I walked out the door we were right in the middle of the entertainment district. It was a huge eye-opener for a guy from Saint John. When I came back to Saint John I saw that there was really something missing. I saw the old buildings that were heavily vacant and I knew there was a ton of potential

Q: I understand you decided to fully leverage this opportunity by attracting some financialn investors?

A: I looked for investors because I knew there was a great investment opportunity in Saint John, but I needed some partners. I needed some money to really capitalize on this so I put an ad out in Kijiji and I posted it from coast to coast – from Vancouver all the way to Newfoundland. The ad said, “Attention real estate investors, I’m going to tell you now what you wish you would have heard five years from now had I not told you today.” What I was seeing in Saint John was probably about $15 billion in projects planned, such as Eider Rock (Irving Oil’s second refinery) and the Point Lepreau project.

Q: What was the response to your Kijiji ad?

A: I had about a dozen calls and I was fortunate to get a couple of people from Alberta who were experienced in real estate, understood what the real investment looks like and could spot an

opportunity. They flew here about a week later and we started to look at opportunities – much larger properties than I had actually ever worked on. Before I knew it we had investors and we were offering on a million-dollar property. This was at the time when I had been only dealing with properties that were $300,000. We were now really unleashing the potential of each building.

Q: Did anything change when the 15 billion in projects didn’t pan out like you had hoped?

A: Other people saw it as a problem or an obstacle. I’m more of an optimistic type of person. I always try to see the good in every challenge or the silver lining in every dark cloud. We didn’t take any huge leaps, we took steps forward when everybody else was saying, “Wait a minute, this is the wrong time to be investing.”

We didn’t bet the farm. We just tested the market. We did a few apartments, put them on the market then did a few more. If we had done a 100-unit development at that time, well, we probably would have been in trouble.

Q: Recent vacancy rate headlines around the province are saying it is at 12 per cent. Is this the doom and gloom you’re experiencing?

A: Our vacancy is pretty close to zero and that’s because we’re offering a very unique product in a great location. We offer exposed brick, 10- or 12-foot ceilings, big heavy timbers, a rooftop patio with a hot tub, a view of the harbour and for a good price in Saint John. There’s nobody else that’s offering this unique product. People want something different.

Q: So your goal is to differentiate your properties?

A: If you want to help guarantee your success, I think one of the best ways to do it is to be different from everybody else.Q: What keeps you up at night?

A: Cash flow. I got perspective when I went to listen to a CEO of one of the largest developers in the country. They built the SkyDome in Toronto and all kinds of major projects and they’re a billion-dollar company and even they have cash flow issues.

Q: People reading this may be sitting on the cusp of an idea, like you were. What advice would you give?

A: I would say you have to look at how much pain you’ll feel in the long term if you don’t do it. So the pain of regret is probably a lot more painful than the pain of actually going for it. Personally, I don’t want to have any regrets.

Q: How would you finish the following sentence, “A leader’s job is to…”?

A: It’s to dream, inspire, execute and deliver.

Q: What is your biggest challenge?

A: I’m always challenged because I’m always thinking about the future. One of my biggest challenges is enjoying the present as much as I need to. The truly successful person is somebody who really hasn’t lost sight of what’s most important in life.

Q: Where does inspiration come from for you?

A: It comes from a lot of places. I grew up in poverty in the north end of Saint John, down on the boulevard. There were a lot of issues around me, but it taught me the value of a dollar and it motivated me to be something incredible. I want to show kids in those types of neighbourhoods that it doesn’t matter where you come from; all that matters is where you’re going.