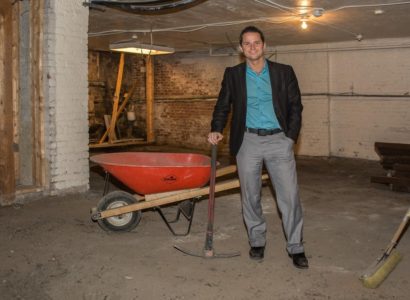 Notices posted on the front doors of the upscale, fine dining restaurant Bourbon Quarter and its sister eatery, Magnolia Café, brought on sighs and grief. They’re bankrupt. Not far away, just down the same street, in fact, a native Saint Johner who has returned after an eight-year hiatus is investing in her hometown with a new restaurant, replacing the former Opera Bistro.

At the top of King Street, the Bargain Shop, whose big-box storefront remains the odd ball in the array of boutiques and restaurants down the hill, has been shuttered for almost two years. A few blocks toward the waterfront, construction crews are busy renovating the former Thai Hut into a new sushi restaurant.

“The market is definitely a lot softer than it was a couple years ago,” said Keith Brideau, whose Historica Developments has been a major investor in the commercial district.

“Given the economic climate right now and the high unemployment numbers and lack of money moving around the economy, there’s less people spending money in restaurants and retail stores.”

Don’t mistake Brideau’s candor for pessimism. His company recently finished developing 11 apartments and four businesses on Water Street and Prince William Street. And his crews have now turned their attention to a 25-apartment project on Princess Street overtop the Hayward and Warwick store. Brideau sees the negative economic signals, but he’s not bowing to them.

“Sometimes there’s people that say, right now is not the time to invest. But I think the very successful people, they go with their gut, they go with what’s been working for them and they continue on,” he said.

In September, the story was similar, with 1,600 jobs lost in accommodation and food services, compared to the same month in 2011. It’s still too early to tell if restaurateurs and hoteliers are witnessing a downward trend in their industry, said analyst May Luong, because there were gains – a boost of 1,300 jobs, in August.

The grim economic outlook for the region was lost on Kimberley Steele, who was getting ready for the grand opening of her East Coast Bistro next Friday. Steele and her husband Tim Muehlbauer bought the Prince William Street property from Margret and Axel Begner, who ran Opera Bistro out of the venue for more than seven years.

Steele grew up on Saint John’s west side, but has been gone for eight years, earning her stripes as a culinary artist in the competitive and cosmopolitan market in Vancouver. And now she’s home, full of ambitions.

“Uptown has really come along. I’m pleasantly surprised to see new restaurants that have opened; a couple have closed, but a couple new places have popped up,” she said. “There’s a younger vibe that’s paying a lot more attention to what they’re eating, how they’re eating it, where it’s coming from and specific dietary concerns as well. We hope to offer lighter, fresher fare as opposed to much of the deep fried stuff that you find in Saint John.”

Margret and Alex Begner plan to re-open Opera Bistro at their Dufferin Inn on the west side in late November or early December. They’re going to miss the uptown, Margret Begner said, and have not ruled out a new venture in the commercial district if another opportunity pops up.

Elsewhere uptown, Taro, a Vietnamese and Thai restaurant, has replaced Saigon Noodle on Union Street. The Korner Grocery, which burned to the ground in a historic fire in April, is re-opening not far from its original Charlotte Street location.

There is even some optimism surrounding the Bourbon Quarter and Magnolia Café, despite the dismal news written on their storefronts. The restaurant announced on its Facebook page that its doors are closed only temporarily, with the post ending on a re-assuring note: “see you all again in November!”

Despite the optimism of some, Brideau said he can sense a feeling or attitude in the community that things, economically, aren’t all that great.

His senses are spot on. Saint John’s sluggish economy has translated into slumping consumer confidence, according to the Halifax polling firm Corporate Research Associates, which hasn’t seen confidence levels so low in the 20 years it’s been tracking the economic indicator.

Perhaps what the city needs, Brideau said, is an announcement of positive news on the horizon, something to lift the city’s and region’s collective spirits, maybe a dramatic redevelopment of the waterfront.

“What we have to do is support the new restaurants and new retail businesses. We have to go in the same direction we’ve been going and pull together and support these businesses. If we want Saint John to be a much better place, which I think we all want, it’s going to take a lot of people helping each other.”