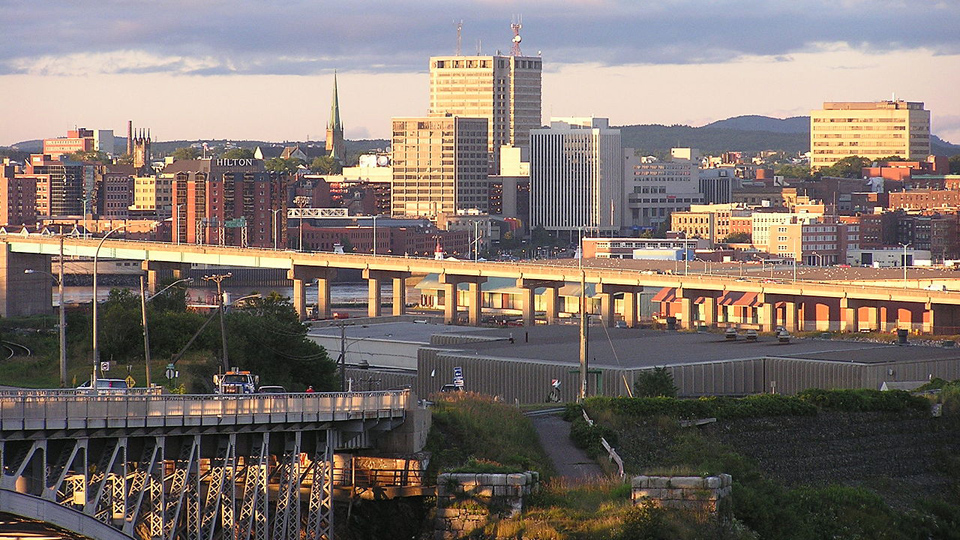 He’s flipped houses, apartments and commercial buildings, but his ultimate goal is to flip Saint John.

Keith Brideau, the founder and vice-president of the development company Historica, says he wants Saint John to be one of the best cities in Canada, and sees no reason why it shouldn’t be. The 30-year-old saw a niche in uptown Saint John for redeveloping older buildings, and has already renovated several major properties into modern, upscale suites surrounded by restaurants and shops.

His most recent project was the King Street Historica Royale – upscale apartments with a rooftop patio, and The Urban Shoe Myth and Silver Daisy Designs on the ground level.

What Brideau is trying to do is create an urban lifestyle in uptown Saint John similar to that in bigger cities such as Toronto, he said in an interview Friday.

“I want Saint John to feel like it’s a big city, and I want it to catch on. I want it to be urban, and a place where people can have fun and live and enjoy themselves,” Brideau said.

“Uptown is where the heart is in the city, and if we want to see the city grow we really have to focus there and come together, and a lot of us have to use our foresight, vision and energy to go that same direction and bring uptown back to life like it used to be. And if we do that then we’ll start to see more people moving to the city.”

This week, Brideau was honoured with the Young Entrepreneur award at the Saint John Board of Trade’s 2011 Outstanding Business Achievement Awards. The award recognizes young business leaders (age 30 and under) just beginning to make their mark.

Brideau has been bringing some of uptown’s big buildings back to life, said Imelda Gilman, the president of the Saint John Board of Trade.

“It’s good for business for the city. It’s reinvigorating our downtown core and bringing new businesses into the community and employing people, and giving residents more choice on where to shop and where to live,” Gilman said.

Brideau grew up in the old North End of Saint John. After graduating from the University of New Brunswick Fredericton with an engineering degree in 2003, he flipped his first townhouse and pocketed $10,000 for his efforts. Next, thinking he could go a little bigger, he flipped a duplex. After several more projects Brideau sought out investors so he could tackle bigger properties.

He signed with investment partners in 2008, turned his sights to commercial buildings, and has been revitalizing the uptown since. Today, Historica has about 20 employees. One of his properties, Historica Court, was voted residential space of the year in 2010 by Uptown Saint John.

And he’s far from done. For his next project, he’s eyeing a 20-unit building that would be a mix of residential and commercial space.

“I’m not going to stick to the status quo. My objective is to grow, take on bigger challenges and try to do things on a larger scale every time I take a step,” Brideau said.

His advice to budding entrepreneurs is to have the courage to think big. It’s what he’s always done, Brideau said, and now he’s made it his mandate when it comes to his ultimate goal: flipping Saint John.

“I want to turn it around and bring it to a point where a lot of people start to come to Saint John rather than leave Saint John. That’s my 10-year plan.”