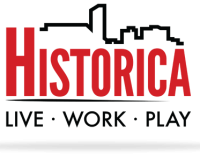 Keith Brideau is bringing a touch of the big city to Saint John.

Brideau is the vice-president and co-founder of Historica Developments in the Port City. He and his team specialize in renovating and revitalizing older buildings in the uptown area.

His latest project, at 93 Prince William St., has taken a property built after the great fire in 1877 and turned it into four floors of high-end residential and commercial space. The bottom floor is occupied by Piece O’Cake Custom Creations, Blossoms Fresh Fruit Arrangements, Crossfit and Advantage Personnel. The other three floors have been separated into luxury apartments with stunning views of the water and historic Prince William Street.

The building was used primarily as office and warehouse space until the ’90s. Compu College had their classrooms there until 2010. Brideau has been converting the classrooms to classy rooms for the past 10 months.

Modern is key. The units are finished with grey, white and black detail. The palate is neutral enough for bright decor, but makes for a sleek backdrop. Intricate lighting systems highlight every feature, including the hallways where lights work on a motion sensor to conserve energy. Brideau also stresses the importance of natural light, using frosted glass doors throughout units to let the sun permeate.

“For me, I’m trying to differentiate myself in the Saint John market to be the modern, urban higher-end living space. If you want a great place to live and a great lifestyle, move into a Historica development,” he said.

Brideau said they cater to people who want to feel like they’re living in a big city. He said Saint John has great quality of life, but quality living spaces were hard to find. Now, people are moving back to the city core from the suburbs and they’re looking for a place to live.

“What we’re doing is taking these buildings and bringing them back to life and giving people a place to stay,” he said.

If it weren’t for the practically panoramic view of the harbour, you’d think Brideau’s personal unit in the building was in Manhattan. He’s left one brick wall exposed, with the original beams in plain sight overhead.

Brideau will be moving into the building in a month’s time when his unit is complete. The developer, along with his wife and two daughters, will be occupying the suite that has a rooftop patio, DJ booth, cat house and skylights.

The Historica Riviera property on Prince William is just one of a handful of Historica developments. Brideau said he doesn’t approach properties with the same vision every time. He said every space is unique, with its own character and quirks.

“You try to look at some of those key things that are there and use your creativity and try to pull them out a bit. Make them stand out and, at the same time, bring in something new that’s fresh and clean and professional,” he said.